Aizpiri was born in Paris in 1919 and while little is known about the painter’s childhood, he was enrolled at the Ecole Boulle around 1934; there he learned to design furniture and marquetry. Two years later, he abandoned this course of study when he was accepted at the Ecole des Beaux-Arts to study painting. 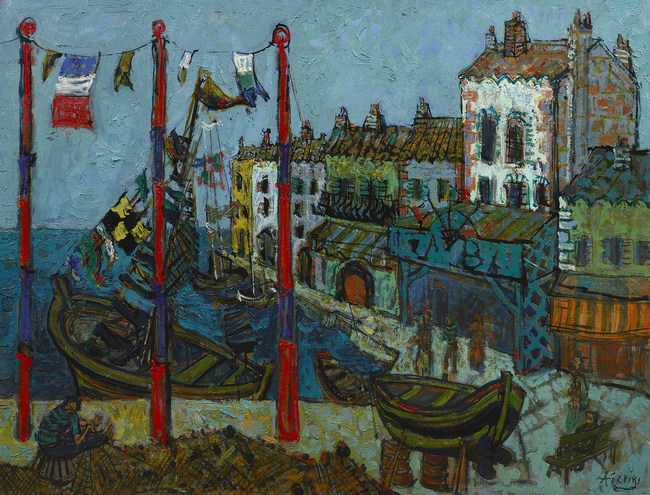 By 1938, Aizpiri was established enough to obtain a commission from the regional government in Paris. More importantly, his address is listed as 91 rue de Vaugirard in Montparnasse. The nineteen-year-old painter was living in the liveliest arts community of his day with neighbors such as Chagall, Soutine, Pascin, Foujita, and Giacometti.

Aizpiri’s career was abruptly halted in 1939 when France and Great Britain declared war on Germany. Whether Aizpiri remained in Paris or fled elsewhere is not known. One clue, however, is provided by two still-life paintings from 1944, both of which reference Brittany. Still Life in front of a Breton Landscape and a companion painting, Still Life with Fruits … both pay homage to the Post-Impressionist works of Cézanne and Séguin.

Although information about Aizpiri’s life during the war years remains elusive, he emerged in 1946 with a well-defined aesthetic voice. Le Port de Saint Mandrier is an important example from this period and features a subject that would occupy the artist for much of his career … the landscapes and ports of France.  The painting illustrates his attention to the figure and an increased simplicity of line. The academic perfection of his earliest work is no longer a concern, nor are the stylistic experiments based on Post-Impressionist masters. What does remain consistent is the emphasis on daily life and working people. Aizpiri’s aesthetic ideas found a warm welcome among other like-minded young artists, including Buffet, Minaux, and Rebeyrolle who hoped to reinvigorate the importance of the human being and nature as the center of art. At the same time, the Galerie Drouant-David in Paris coined the term “jeune peinture” (young painting) when it created the Prix de la Jeune Peinture beginning in 1946. Gradually, an independent salon emerged calling itself the Salon de la Jeune Peinture as well. Aizpiri was one of the founding members.

During the 1950s and 1960s, the reception of his work expanded internationally. He first exhibited in New York at Wildenstein Gallery in 1956, followed by a show at the Acosta Gallery in Los Angeles in 1959. In 1963 Aizpiri’s work was introduced to the Japanese market at the Second International Figure Arts Exhibition in Tokyo and Osaka, where he subsequently exhibited every year as a guest artist. The relationships he established in Japan would become the foundation for a museum largely devoted to Aizpiri’s works in Onomichi. The Nakata Museum of Art was established in 1969 and today holds over 200 works by Aizpiri.

Le Port de Saint Mandrier was originally exhibited at the Prima Biennale Internazionale d’Arte Marinara, Genova, in 1951, and has been in a private U.S. collection since the 1980s.  Howard Rehs commented that “over my long career I have seen many works by Aizpiri, and this was the first that I had to have. It is a spectacular example in outstanding condition.”

Paul Aizpiri lived nearly a century, continuing to work and exhibit right up until his death on January 22, 2016.

Rehs Galleries Inc. is, along with its principals, considered one of the world’s leading dealers of 19th and early 20th-century European paintings and is currently involved in the catalogue raisonné research projects for Daniel Ridgway Knight, Julien Dupré, Emile Munier, and Antoine Blanchard.  Howard Rehs was a past president of the Fine Art Dealers Association, is currently on the Board of the Antiques Council, and has been a member of the Internal Revenue Service’s Art Advisory Panel since 2008.